Kharkov City has a well-developed and ramified public transportation system. The locals and visitors can move around in trolleybuses, streetcars (trams) and buses, or use the Underground (the subway).

But not all transportation means are accessible to people with physical limitations or disabilities. In 2007, the first low-clearance buses (five LAZ-A183 and three MAZ-206)  started serving only two lines within the city.

Within the framework of general preparation for the 2012 UEFA Cup Final, the number of accessible public transportation vehicles has increased considerably. As of today, there are 92 low-clearance buses and 52 low-clearance LAZ E-301trolleybuses. But the city lines are served by both modern (low-clearance) and obsolete (high clearance) vehicles. Unfortunately, low-clearance vehicles time-table is non-existent, and people with physical limitations or disabilities have to simply wait for the arrival of a suitable bus or trolleybus.

The trolleybus fare equals UAH 1.50 irrespective of the distance travelled by the passengers and is paid to either conductor or the driver him/herself

Please find below the list of Kharkov trolleybus lines equipped with low-clearance vehicles:

Kharkov City has 139 bus lines; ten of these use low-clearance MAZ 206, Bogdan A601 and LAZ A183 buses equipped with neon-lit electronic “running line” indicator boards, telling the stops visually.

The bus fare varies from line to line between UAH 2 and UAH  3, irrespective of the distance travelled by the passengers and is paid to either conductor or the driver him/herself, the timetables also differ; on the average, Kharkov buses carry passengers from 06:00 to 23:00.

In Kharkov City, there are 14 tram lines; the fare is UAH 1.50, irrespective of the distance travelled by the passengers and is paid to the conductor (sometimes to the driver him/herself). All lines are equipped with outdated tram cars, almost inaccessible to persons with limited locomotion ability. Some cars have neon-lit electronic “running line” indicator boards, telling the stops visually to people with insufficient hearing; otherwise, all Kharkov streetcar drivers use loudspeakers to announce the current and the next stops.

The fare equals UAH 2, irrespective of the line and distance to be travelled, and is paid with a specially bought token or electronic pass card. Both tokens and cards can be acquired at self-service vending machines that function at every subway entrance.

Please note that the Kharkov Subway is totally inaccessible to people with limited mobility, especially to wheelchair users. Originally, all stations had neen designed and constructed with complete disregard of the needs of people with physical limitations or disabilities. The first accessible subway station, Prospekt Pobedy (Victory Avenue) will start functioning in 2012.

Apart from being inaccessible to wheelchair users, the subway presents considerale access and travel difficulties to people with limited vision or hearing. The subway cars do not have visual displays serving the needs of those whose hearing is not perfect. 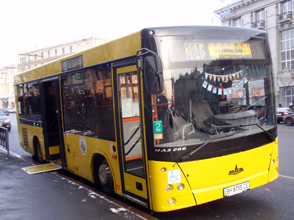